On this day 159 years ago, John Brown was executed by way of hanging in Charles Town, Virginia (present day West Virginia). His crime? The failed raid of a military armory located in Harpers Ferry, VA.

Brown was born in Torrington, Connecticut in 1800 to a family of abolitionists. Like his family, Brown adopted what many would later refer to as “extreme anti-slavery” views. For the 1830s, these views were more radical than many mainstream white abolitionists were comfortable with. Brown believed that slavery was the United States “greatest sin,” and dedicated his life to eradicate it. He moved to abolitionists communities like Springfield, Massachusetts where he would frequently listen to lectures by Sojourner Truth and Frederick Douglass—who he would later count as one of his closest friends—and worked with Underground Railroad abolitionists like Harriet Tubman.

At age 55, Brown moved to the Kansas Territory with his adults sons to aide support for the anti-slavery forces engaged in a violent border war with pro-slavery forces. It was in Kansas that John Brown would earn his militant reputation that would dominate literature about him for years following. In May 1856, Brown and his sons were accused of killing five men in the pro-slavery settlement of Pottawatomie, KS after anti-slavery settlers were attacked in Lawrence, KS. The incident would later be referred to as the “Pottawatomie Massacre.”

A year after Kansas, Brown began to make plans for his next big mission—an armed insurrection at the military armory located in Harpers Ferry. Brown believed that with this attack, weapons from the armory could be seized, given to enslaved African Americans, and used to spark an anti-slavery rebellion. A rebellion that Brown believed would end slavery in the United States once and for all. This was 1857, the same year the Supreme Court of the United States delivered a devastating blow to the anti-slavery cause with the Dred Scott decision. Brown and his many supporters believed after the Dred Scott decision there would be no peaceful end to slavery.

On October 16, 1859 Brown led 18 men—13 white and 5 formerly enslaved African Americans—into Harpers Ferry, VA. They captured federal buildings, cut telegraph wires, killed four people and wounded nine. Brown believed that once inside the armory that locally enslaved people would come to their aid to help hold the ferry, but that never happened. After a 36-hour stand-off, eight of Brown’s men were either killed or captured while five, including one of Brown’s son, escaped. Brown was wounded in the attack and taken to jail in Charles Town, present day West Virginia.

On Nov. 2, 1859 Brown was found guilty of all charges brought against him, including conspiracy, inciting servile insurrection and treason against the state. He was sentenced to death by way of hanging. On the date of his execution, more than 1,000 troops arrived to protect the execution for fear there would be an attempt to rescue Brown. Unable to make a final statement before his execution, Brown wrote a note in his cell before arriving to the gallows:

“I, John Brown, am now quite certain that the crimes of this guilty land will never be purged away but with blood.”

History has an interesting way of remember John Brown. Often, he is depicted appearing wild and crazed, with a look of insanity in his eyes. But was John Brown wrong? He said himself many of times, slavery would not end peacefully; it would have to “be purged away with blood.” The Civil War, which erupted only 16 months after Brown’s execution, proved the validity of Brown’s claim.

Personally, I believe Frederick Douglass said it best in a speech delivered in memory of his friend on the 14 year anniversary of Harpers Ferry in May 1881:

“If John Brown did not end the war that ended slavery, he did at least begin the war that ended slavery. If we look over the dates, places and men for which this honor is claimed, we shall find that not Carolina, but Virginia, not Fort Sumter, but Harpers Ferry, and the arsenal, not Col. Anderson, but John Brown, began the war that ended American slavery and made this a free Republic. Until this blow was struck, the prospect for freedom was dim, shadowy and uncertain. The irrepressible conflict was one of words, votes and compromises.”

So on this date, 159 years later, let’s remember the legacy of John Brown—the man who started the war that would end slavery. 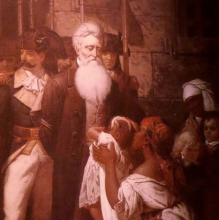 Katie has a passion for sharing the untold stories of history and loves to think of new, creative ways to engage museum visitors. She graduated from Northern Kentucky University with a Master's degree in Public History and the University of Central Missouri with a Bachelor's degree in History. Her primary field of study includes Underground Railroad history, human rights history, and early 20th century American History.